After a hard week at work everyone needs a way to blow off some steam, and for the guys on this work site it was an old-fashioned game of roshambo.

Mike had been a bit unsure about it at first, but having watched the games for a few weeks he had to admit it was fun to watch.  This would be his first time in the ring though and he was a bit nervous, but he was also determined to make a good impression.  Your first time in the ring was a bit of an initiation, you wouldn’t be fully accepted into the group until you had taken part.  There were some other guys who scoffed at the Friday afternoon roshambo game, but Mike generally didn’t like those guys.

Mike is in his early twenties and just under 6 feet tall.  He’s well-built and proud of his body, justifiably so.  Top it off with short, sandy blonde hair, a close-cropped chinstrap beard and an easy-going smile and it is hardly surprising that both women and men walking past the site will often watch him as they go past.  That he is often dressed similarly to today, a tight green t-shirt and cargo shorts that do a very good job of showing off his muscles certainly helps.

Mike steps into the ring to a chorus of cheers and waves to the guys around the circle.  Once the cheers have died down his opponent steps in.  Henry is a bit older, just over 30, and taller at 6 foot 4.  He is all over pretty big, though he has a fair amount of added weight that isn’t muscle, including a slight beer belly.  Today he’s wearing a fairly loose black t-shirt and jeans, which are tucked into his big brown rigger boots.  Henry is jokingly known as ‘big foot’ around the work site for those boots.  His feet are size 14 so they are rather big, and the rigger boots he always wears make them look even bigger.  Certainly, they make Mike’s size 10 honey-coloured Caterpillar boots look small by comparison.  Henry is quite a quiet guy, but likeable enough and he gets a good cheer of his own, though Mike would like to think not quite as loud as his.

Kyle is being the referee today, not that the rules are very complicated – first guy to fall or give up loses.  His only real job is to do the coin toss.  As Mike is the youngest he gets to call it and calls ‘heads’.  It comes down tails, so Henry gets the first kick.  Mike and Henry shake hands and then Mike steps back, plants his feet firmly a shoulder’s width apart and grasps his hands behind his back, ready to take the kick.

Henry adjusts his position slightly and practices swinging his leg a few times.  Just as a few of the guys are starting to shout ‘get on with it’ he pulls his leg back further and powers the steel toe of his rigger boot into Mike’s nuts.

The pain that explodes from Mike’s crotch is intense.  He’s taken a few hits to the nuts before, but this was easily equal to the worst of those.  Some of the guys had told him beforehand not to worry too much if he fell pretty quickly, as he was new his nuts would take a while to toughen up, but he was determined not to fall on the first kick.  He did bring his hands around and cradle his aching balls though.

After taking a few moments to collect himself Mike shakes out his feet and sights on his targets.  Henry is standing with his hands on his hips, waiting, and gives Mike a slight smile as he prepares to take his kick.  Mike is an avid football player and kicked Henry’s nuts just the way he would a football, rather than using his toe he hit with the laces.  It meant that you didn’t get the added force of the steel toe, but it was more difficult to miss, and judging by the grimace on Henry’s face he got both of them right on target.

The second kick is even worse than the first.  Mike can feel the toe of Henry’s boot compressing his precious nuts against his body.  He groans softly and puts his hands on his knees to support himself.  He can hear the guys cheering him on, which helps a bit, but the pain is incredible.  He has to take a bit longer to compose himself this time and then drives his boot into Henry’s nuts as hard as he can. Henry grimaces again and rubs his nuts with his hands, but it isn’t as big a reaction as Mike had hoped for.

The third kick is actually not as bad as Mike had feared, Henry’s aim was a little off and the side of his boot hit Mike’s thigh, lessening the impact on his poor bruised balls.  It still hurt but he was able to recover a bit faster this time and drive another devastating punt into Henry’s nuts.  It was amazing how much give there was in Henry’s jeans, after that kick one of the legs had mostly pulled out of his boot and was now resting around the top.  He realised it was probably absorbing some of the force of his kicks and helping cushion the blow slightly.  In contrast his shorts offered much less protection, the fabric was thinner and they had little resistance to being bunched up under his nuts.  In retrospect wearing shorts today had probably been a bad idea, but there wasn’t much he could do about it now.

Mike got lucky with the fourth kick and Henry grazed his thigh again.  Admittedly his thigh was starting to hurt now too, there would definitely be a nice bruise there, but anything that took some of the force off his nuts was worth it.  His nuts were throbbing almost constantly now, and he was sure there were swollen too.  He briefly considered quitting now, four kicks wasn’t bad and he knew the luck he had with the last two kicks wouldn’t hold forever.  He dismissed the thought though, he rather doubted that he was going to win, but he wanted to at least get a bit more of a reaction out of Henry before he went out.  He took a step back and fired another penalty kick into Henry’s balls, and was rewarded with a long groan as Henry squatted slightly holding his nuts.  He felt like he had accomplished something at least and stepped back ready to take the fifth kick.

Unfortunately for Mike, Henry was spot on with his aim this time and the full force of that steel toed rigger boot powered into his vulnerable balls.  The pain radiating from his nuts was like nothing he’d ever experienced before.  Somehow, he managed to stop himself falling down though, he squatted right down and supported himself with his hands on his toes, but the soles of his boots were still the only thing touching the ground.  He stayed like that for a couple of minutes, holding onto the toes of his boots for dear life, before shakily standing back up again ready to take his fifth swing at Henry’s nuts.  As he stood up a cheer went up from the guys standing around them, and that made him feel a bit better.

He was aware this might be the last kick he got on Henry so he was determined to make it count.  He took two steps back and then charged forwards and rammed the toe of his boot into Henry’s balls with all the force he could muster.  Henry’s face lost some of its colour and he squatted down, holding his balls, but he was not going to fall.

Mike swallowed and stepped back with his legs apart ready to take the next kick.  His nuts were screaming at him to stop, but he had to take this kick at least.  As Henry pulled his leg back everything seemed to go into slow motion.  Mike could pick out every little scratch and imperfection on the toe of Henry’s boot as it soared towards his nuts.  His eyes followed it as it impacted and he could see the outline of his nuts through his shorts as were flattened by the boot.  They felt like they were going to burst now and the pain was so intense his vision went black.

The next thing Mike knew he was lying on his back on the ground.  The guys circled around them are cheering, both Henry for winning, but also him for being a good sport.  Henry walks over and offers him a hand to help him get up.  Mike is still a bit dazed, but takes Henry’s hand and is able to get up with his help and hobble out of the ring.  As they go some of the guys clap him on the back or tousle his hair.

“That was really good for your first time, and you kick like a mule.  Come on, let’s get a beer, it’ll make you feel better,” said Henry. 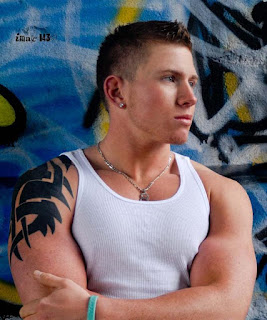 Add comment
Load more...
Newer Post Older Post Home
Subscribe to: Post Comments (Atom)
My stories feature a variety of guys getting their balls busted. Mostly m/m ballbusting, but also some f/m. All stories are works of fiction, and any apparent similarities between the characters and real-life figures is unintentional.

You should not try and replicate anything in these stories at home as it could result in serious injury. Even some of my characters don't always survive unscathed and they are far more resilient than any real person.

I sometimes use pictures from the internet to illustrate my stories, if you see a photo of yours and want it removed just let me know.

BBJake
I enjoy reading and writing ballbusting stories. I also have a thing for boots as you'll see from my stories. If you have ideas for characters or plots you'd like to see, feel free to get in touch.